The German Pinscher originated in southern Germany and was first entered into German records in 1885 as a smooth coated Pinscher. The Pinscher was one of the foundation breeds in the origins of the Doberman Pinscher and the Miniature Pinscher. The Wire-Haired Pinscher and Smooth-Haired Pinscher were originally one breed with two coat varieties. The breeds were officially divided in the early 1900’s with the wire hair pinscher being renamed the “Schnauzer” while the smooth haired variety remained the “Pinscher”. These medium-sized dogs were bred from early European herding and guardian breeds and were not related to the terrier breeds developed in Britain. 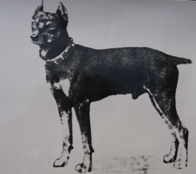 The FCI breed standard, which governs the appearance of the breed in most areas outside the United States, lists only solid red and black with tan or red markings as acceptable colors. In the United States Red, Fawn, Blue and Tan and Black and Tan are all acceptable colors. Today’s German Pinscher can also carry the gene for liver and tan color however this color combination is not allowed in any breed standard worldwide. 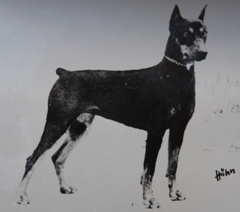 WERNER JUNG’S CONTRIBUTION
Following both World Wars, the breed was nearly lost. There were no litters registered in West Germany from 1949 to 1958. Werner Jung is credited with single-handedly saving the breed from extinction by smuggling a black and red bitch out of East Germany and breeding her with four oversized Miniature Pinscher males and one Miniature Pinscher Female to reestablish the breed. Most if not all German Pinschers today are descendants of these dogs.

Below are Kitti and Jutta, Werner Jung’s foundations in the 1940’s. 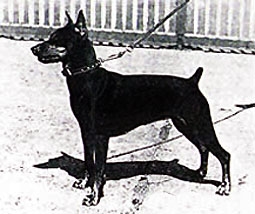 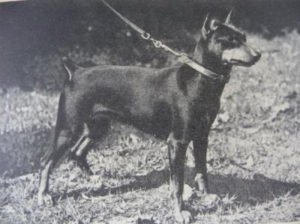 ARRIVAL IN AMERICA
In the late 1970’s and early 1980’s, German Pinschers began to be imported into the United States and bred in small numbers. Early US breeders imported from Germany, England, Sweden, France, Finland and Czechoslovakia. The German Pinscher population has been growing slowly but steadily in the United States since the breed was accepted into the American Kennel Club in 2003.